Durham Arts Council Under Attack for Not Supporting Artists 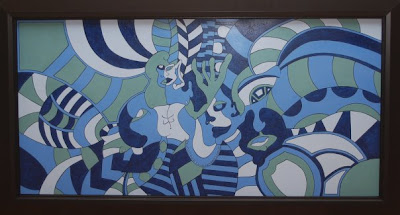 Baltimore Blues is the work of King Kenney

I’ve been spending a lot of time talking to artist lately. My passion to know more about how they feel is rooted, in part, to my son taking the leap of depending on people to buy his work. It also has to do with my being an artist. It reminds me of a line from “Hustle and Flow”- “It’s hard out here for a pimp.” Well, it’s hard out here for an artist.

It’s always been hard out here, but things have become increasingly more difficult since the economy took a turn for the worse. My second novel hasn’t sold like the first one, and I’m clear it has a lot to do with people pinching those pennies the best they can. Those artists are telling me about how they scuffle to stick with their passion. They have to decide between creating masterpieces and paying the rent.

The worst part is a lack of resources to inspire them to keep on keeping on. Each person I’ve talked to has the same complaint. They want to know more about the purpose of the Durham Arts Council. They are disenchanted with the lack of support coming from the organization established to promote and support the artists in our community.

I’m told the council is set up to support its own infrastructure while leaving very little for the artists. Other than the Emerging Artist grant, they say they are left with no more than a few chances to showcase their work, and that comes with a price. They have to pay to participate in Art Walk and Centerfest.

“I paid to be in the last Art Walk,” one of the artists told me. “I lost money because no one brought my work.”

I’ve heard that from King, my son, and others who have chosen not to participate in Art Walk for that reason. The point isn’t to throw darts at the Art Council, but to bring attention to the perceptions of those who create the work. These views are reflected among both visual and performing artists. Many base their opinion on a comparison of what is done in other communities.

A good example is the New York City Artist Homestead. I first heard about the program after Sima Flower, former owner of Peacefire Gallery in downtown Durham, moved to New York City. The Homestead offers a variety of incentives to those who make a living with their art. Check out their website at:
http://www.artisthomestead.com/

1. Inexpensive Historic Structures And Raw Space Available - as well as vacant lots and other structures owned by the City of York Redevelopment Authority.

2. Zero Interest, Forgivable Loan Of $5,000 Per Artist - a panel will jury five visual artists homesteading in City of York in 2006, judged on quality of work and/or business plan. Once homesteader lives in home for five years, loan is 100 percent forgivable.

3. Architectural fees up to $3,000 - for services of York City architects per artist/homeowner for best five visual artists homesteading in 2006-2007.

5. Waiver of Permit Fees. - as well as vacant lots and other structures owned by the City of York Redevelopment Authority.

8. Free Gym Membership with unlimited fitness and aquatic classes - for one for one year courtesy of YWCA. Annual value of $453.

I couldn’t fight the urge to list all the incentives. Shouldn’t artist in our own city have access to some form of support? They need more than a building they don’t use, with an infrastructure paid for by the city and other grants. The money needs to feed those who need it the most rather than a staff committed to giving the illusion of supporting the arts.

That’s the word coming from the artists. Don’t shoot the messenger, deal with the perception.
Posted by REV-elution at 1:34 PM