Ar-Rahmaan installed as Pastor:The Journey of a Female Minister to Find her Way 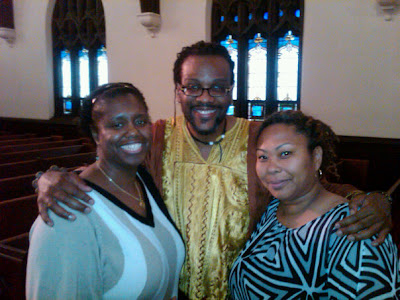 She would sit in the back of the church each Sunday. Unlike many of the others who gathered for worship, she failed to reflect the spirituality of those enamored with visible praise. She didn’t stand during one of those electrifying songs that triggered memories of how God carried us through many dangers, toils and snares. She didn’t shout in the middle of a line in my sermon to denote a connection with the thought uttered. She just sat in the pews. Unnoticed. She just listened.

My first thought when she came to my office was her name - Willetta J. Ar-Rahmaan. She told me her story. “I’m Muslim,” she said. She was there, listening to my words. I watched as she made her progression from the balcony, to the back row on the first floor, to closer to the front, and then, she made that last step.

“I’m called to the work of ministry,” she told me. Her announcement came as no surprise. I recognized something different after that first encounter. Yet, a still cried. There was something about the message of love and compassion that compelled her to move from the safety of the pews into the work of ordained ministry.

I continued to watch her grow. She would call me and share being caught between her life as computer geek employed by IBM and the work in ministry. “I want to walk away from my job, but how can I when I have to eat.” I listened as I felt the pain of her struggle to walk within her calling. I listened and watched as she completed her Masters of Divinity while maintaining her job at IBM. She commuted from her home in Charlotte to attend classes on Saturday’s at Virginia Union in Richmond, Virginia.

I listened as she endured the deep-seeded sex discrimination within the African American Baptist church. She watched as men were promoted to the work of ministry while she was passed by despite her theological training and willingness to serve. I could hear the frustration within her voice as she prayed for a place, any place, to use her enormous gifts and graces.

“Leave the Baptist,” I instructed her. “Why remain in a place that fails to affirm you.” I was then and am saddened now by that admission.

I watched as she made the move I suggested. She contacted the District Superintendent to begin the process. She enrolled at the Hood Theological Seminary to take courses on Methodism. It seemed like the perfect union, although she would take a cut in pay.

Fast forward to Sunday, January 8, 2012. On yesterday, she was installed as Pastor of the St. Paul United Methodist Church in Newton, North Carolina. Sadly, I couldn’t make the trip due to my need to be in Durham for worship service. If there, I would have made comments to her congregation. I would have spoken about how proud I am of her for pressing on despite the barriers in her way.

I think of other women who have fought to find their way within structures unwilling to share space. I pray for all of my daughters in ministry who remain faithful while men and women refuse to concede the power of their voices. When I consider the women who have moved on to obtain their Maters of Divinity from congregations I led, I’m amazed by the numbers. Willetta, Richele James, Chanequa Walker-Barnes, Vanessa Enoch. Karen Thompson, Edna Stephens, Teddra Bynes, Denise Bland-Jones, Ivy Hooper, Katia Wilson, Prinn Deavens and Connie Pope. That’s twelve out of the thirty-six women who have entered ministry under my leadership.

Willeta is the third to be called to lead a congregation. Both Teddra Bynes and Karen Thompson, like Willetta, had to leave the Baptist to make it happen. Karen, who was ordained under my leadership, has led congregations with the United Church of Christ. Teddra is an Episcopal priest. Four other women planted new churches – Arlene Chavis, Daryl Bowick, Pat Lee and Shamiele Alston– all are Pastors of churches they started in Durham. Three others, Chanequa Walker-Barnes, Vanessa Enoch and Katia Wilson, hold PhD’s and serve in the academy.

There are 65 men and women who have entered ministry from the work I have done in Durham, NC. Many of the men have been appointed to lead congregations within the Baptist church family. Others have gone on to organize new churches. Sadly, not one woman has been called to serve within a Baptist Church. Each has been forced to either organize a new church, change affiliation or teach religion at a seminary or divinity school.

This is of concern when it comes to the promotion of theological training within mainline faith traditions. It is saddening that so many have opted not to pursue the benefits of theological training. I’m burdened at the numbers of people being led by pastors who have not taken time to ponder the truths they teach week after week. Shouldn’t we demand of our leadership a level of training consistent to what we expect from other vocations? Or, should we assume that the Holy Ghost feeds truth to those empowered with spiritual gifts?

Women have been forced to prove their worth in ways beyond the men who share that sacred space. Some give up and do it their own way. Others keep pressing, waiting and praying for a chance to use those gifts God has given. So many female clergy become battered along the journey of self-discovery and affirmation. Don’t give up Richele. Hold on Cheryl, Sandra, Joyce, Regina, Connie, Valerie and the other women waiting to find a place.

As you wait, thank God for Willetta. She made it! Beyond her past. Beyond her gender. Beyond all that stood in the way – well done Pastor Lettie. Well done.
Posted by REV-elution at 5:31 PM