Lessons From The Bus 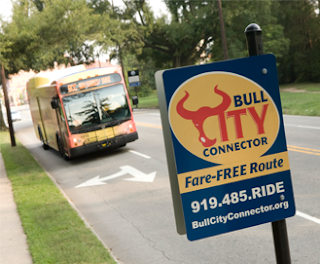 I took a ride on a bus the other day. I hiked the short distance from my loft at West Village to the parking lot less than a football field away. It was there that I jumped onboard the Bull City Connector and made my way to Whole Foods near Ninth Street. I picked up a few items in the produce section and ran to the corner of Broad Street and Main just in time to catch the bus headed back downtown. It didn’t cost me anything.

Yeah, I got a bit heated when the driver stopped at the Shell Station to pick up a few munchies. It’s hard to complain when the ride is free. I looked at the only other person riding the bus. It didn’t seem to trouble him that our chauffer took a break in the middle of our journey. His lack of concern forced me to back off from the emotions of the moment and deal with my own ego. The swanky side of my makeup was creeping to the top. I sat back and chilled as I reflected on the gift of the quick ride down the street.

Normally I take the 20 minute walk to pick up my items for the day. I considered walking, but dang it was too darn hot and my feet hurt. When I saw that big orange bus gliding in my direction I waited and jumped on board. Did I mention it didn’t cost me anything?

Walking and catching the free bus is part of a lifestyle change that I’m embracing with passion. If I could I would do away with the car thing altogether. The cost for petro combined with the impact on the environment has me rethinking the comforts of cars loaded down with all the creature comforts. My two feet serve me well, and the bus comes in handy every now and then.

The trip back from my Whole Food excursion was interesting. I took a phone call from my friend Mariann Aalda. Aalda is known for being the first full time African American female soap opera star. She portrayed DiDi Banister in The Edge of Night. She is also known for being the daughter of Redd Foxx and Della Reese in the sitcom “The Royal Family”. I’ll never forget the scene where she kissed O.J. Simpson on the HBO series First & 10. The fact that she played his wife makes it worse.

She shared with me her thoughts on the new movie “The Help”. I normally don’t use my phone in public spaces, but the discussion held me captive. It felt strange having the talk on a bus. It made me think of the women portrayed in the movie. They had to ride the bus to get to work. We talked about our mothers. Most people of color have stories of mothers, grandmothers, aunts, cousins or sisters who cleaned the home of white people.

Aalda loved the movie. Her review was a stark contrast to her views on Tyler Perry. Then it happened. I noticed the people on the bus. Most of them were students from Duke who made their way on the bus somewhere between Duke Hospital and Whole Foods. It felt strange having the conversation within earshot of those far removed from the context of the movie.

Aalda mentioned the dense air at the movie theater due to the older white women who filled the space. The story took place during their lifetime. It must be hard sitting in places that ignite some thought from those days when black and white folks remained distant both in space and way of life. I imagined that the distinction between me and others on the bus has been lessened since the time capsule exposed in the movie.

I said goodbye just before my stop. “Things have really changed,” I whispered upon taking further notice of the people on the bus. Mostly white, obviously not poor, holding backs filled with books, untainted by the labels connected with riding a bus. It was one of those moments within a moment that causes one to exhale. I did.


The bus is for poor people. It’s for those who lack the funds to afford a car, auto insurance and the cost for registration. It’s a haven for criminals and welfare recipients. The bus is for “those people”. Those being jargon used to refer to anyone other than us. This trip was different. In that space and time came the budding of a re-defined community. Small space can do that. It finds people joined together by a common need-to get from point A to point B.

Isn’t it funny how that happens? The image of black women working for white people was transformed into the celebration of new place and time. Those riding the bus were not limited by hue, caste or credentials. Some road because they had no option but to ride the bus. Others road because it’s our way of minimizing the burden on our globe and pocketbooks.

Did I mention it didn’t cost me anything?