Durham Attempts to Model Harlem Children Zone: No Kool-Aid for Me 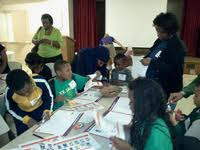 I’m not ready to drink the Kool-Aid. I simply don’t buy into the hype. From all accounts, replicating the model that has changed Harlem is the best thing since sliced bread met ham. It’s another example of how folks are quick to duplicate success and other places rather than create from the strengths they have at home.

Don’t get me wrong, I’m a big Geoffrey Canada fan. His Harlem Children’s Zone has revitalized a community left for dead after the emergence of crack cocaine. The hub of black artist expression was known more for drugs, crime and low academic performance than for being the home of the renaissance that changed the way people think about being young, gifted and black.

The Harlem Children’s Zone has garnered national exposure for Canada who is the subject of the documentary “Waiting for Superman”, and the model of transformation used by the Obama administration. People in Durham have taken a deep swig of the Kool-Aid. A few took the trip to Harlem, came back with talk of replication, and have garnered enough support to hire an Executive Director and receive money from notable foundations to recreate the magic of Harlem.

As much as I love what Canada has done with the Harlem Children’s Zone, it’s critical that folks from across the nation consider the dynamics that led to success in Harlem before jumping on the truck with hopes of seeing the same thing in their backyard. You can’t pack all of that charisma in a box. A changed community isn’t a prize wedged in the middle of the Lucky Charms.

Durham has a fascination with chasing the pot of gold at the end of the rainbow. Back in 1999, a group of leaders took a trip to Minnesota and returned with the fix all formula for Durham. The public was told the Youth Coordinating Board would remedy the duplication of service delivery and lack of collaboration that resulted in youth falling through the cracks.

It didn’t take long for that vision to end on top of the pile with Durham’s other botched initiatives. The saddest part of the hunt to find that gold is the way the process exposes a much deeper issue related to the way things get done in Durham. What Durham needs isn’t a program from another place. What Durham needs is to face the truth regarding how the culture of this community makes it difficult to replicate what works in other places.

Durham leaders have functioned like the proverbial chicken without a head. Missing is serious dialogue regarding how past efforts failed to achieve promised outcomes. What happened with the Youth Coordinating Board? What went wrong with the North East Durham Reinvestment initiative? A close gaze at each will unfold a number of common elements that should be taken into account.

To begin, the Youth Coordinating Board, the North East Central Durham Reinvestment initiative and East Durham Children’s Zone all attempt to do the same thing. Ultimately, the purpose and design of each is the same. Each addresses the need to rethink human service delivery by connecting services from the beginning of life through adulthood. Each addresses the need for greater collaboration. Each has a massive price attached to fulfilling the vision.

Canada is what makes the East Children’s Zone stand out from among the rest. He has the endorsement of the President, a media campaign and a documentary to boast the credibility of his work. This despite reports that the Harlem Children’s Zone hasn’t proven, yet, that it is working. Many have questioned the validity of attempting to replicate a model that is so expensive to maintain.

The Brookings Institution has questioned the credibility of using the HCZ as a national model. The Brookings team writes:

Our issue is not with the HCZ as a philanthropically supported endeavor to improve the lives of children in Harlem, but with the use of the HCZ as evidence that investments in wraparound support services and neighborhood improvements are a cost effective approach to increasing academic achievement. In an era of stress on public budgets, we think there should be good evidence that an expensive new approach works before it is scaled up and widely implemented with taxpayer funds. Our findings and our view are that the HCZ does not provide that evidence. Our quarrel is not with the HCZ but with the evidence for the Obama administration’s request to Congress for $210 million to replicate the HCZ in 20 communities across the nation.

There are a number of points that need to be addressed in Durham. To begin, this is not Harlem. The dynamics of Harlem are different. Harlem is a borough with both a historical and cultural identity of its own. People have rallied in support of Canada due to Harlem’s position as the hub of African American life and culture. Harlem is more than a section of a city; it is the community that epitomizes the emergence of African Americans as intellectuals with creative gifts.

Beyond that, there is no Canada heading the charge of Durham’s children zone. The structure of Durham’s version is limited by the influence of local government and the barriers created when decisions are made void of a clear understanding of what the community needs and feels. Durham isn’t modeling the Harlem Children’s Zone. Durham is modeling business as usual. What that means is finding loads of money to throw at a problem while failing to engage in a real conversation regarding why that hasn’t worked in the past.

Harlem was prepared for change due to its role in ushering the mind of the new Black Man/Woman. You can’t model that by throwing dollars in the direction of a problem. Change begins when people get tired. When they get tired they move.

It’s the same ole, same ole in Durham. Will we ever learn our lesson?