Rush Limbaugh says he has the right to say Nigga 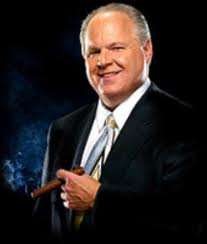 Rush Limbaugh wants the right to use that word.  He says since black folks use it, why can’t he.


Go ahead and use it Rush.


How does it feel?  Liberating?  Justified?  Affirmed”


Does it renew days with two entries – one with Black on the door and the other with White?


Do you get excited at the thought of all-white schools and work settings with only white men wearing suits and ties with a grin that declares “Nigga take your ass down the street?’


I could replay, “kiss my ass cracker” or  “you racist mother…shut your mouth.”


My mama taught me the lesson about sticks and stones and breaking bones.  Words can only penetrate so deep.  The real power of words comes when we give them power.


That’s what Nigger does.  It resurrects memories like the first time I saw a burning cross.  I’m reminded of the time three white kids threw me into a tree, kicked me in the side, spit on me after calling me Nigger.


I have a long history with the N-word.  It’s interesting that despite how much I’ve heard it over the years it’s a taboo for people to say Nigger.  It’s too dreadful to say.  Saying it takes people back to a time when the word brought the type of pain that felt like an ass whipping for no reason.


Nigger had power back then.


“Yessum,” followed by an obedient step to the side. You feel that?


“What you doing here Nigger,” followed by fast moving feet to avoid the bullets launched in your direction.


“You worthless black trash Nigger,” been there.  Heard that.  Remember all of that.


The word is locked deep in that place that fights the urge to start a revolution. My ears know the sound of the words forced through the lips of racist white men and women.  I’ve heard the word enough to know the thoughts of those who use the word when I’m not in the room.


That’s why it hurts me when I hear black youth use the word.  The say it’s different because they have changed the spelling.  Nigger has grown up to become Nigga.


Translation – nigger is a man.


"So was there anything you wished you'd said when you were in there,” Morgan asked


JEANTEL: People, the whole world say it's a racist word. Mind you, around 2000, they changed it around, I think. It starts spelling "n-i-g-g-a."


JEANTEL: That means a male.


JEANTEL: No, any kind of male.


JEANTEL: Any kind. Chinese you can say "nigga." That's my Chino, "nigga." They can say that.


“This was between 9 and 10 p.m. last night on CNN, who is in a quest to become the, again, most respected news organization in the country, perhaps even in the world. So, "nigga," with an "a" on the end, well I think I can now. Isn't that the point? 'Cause it's not racist. That's the point. I could be talking about a male, a Chinese male, a guy at the Laundromat,” Limbaugh said.


Limbaugh asserts his right to use the word based on the views of Jeantel, who is only 19.  She hasn’t felt the spite of the word.  She’s unversed of the sentiment felt by those forced to respond to Nigger in a way that made them bow to the power of white privilege.


Her generation doesn’t know what Nigger conjures.  Changing the R to an A doesn’t change any of that. Nigga is still Nigger, no matter how you spell the word.


With that being said, I’m willing to grant Limbaugh and his cohorts the right to use the word.  Go ahead, tell us how you feel.  Don’t hide your racism – use the word that defines racism.


Call me Nigger.  Call me Nigga. Either version will serve the intent of its usage – the separation of the bigots from the people fighting for justice.


I must warn you Limbaugh.  Saying Nigger comes with a cost.  Black folks aren’t afraid anymore.  We’ll slap you in the mouth, kick you, spit on you and call you a cracker for calling us Nigger.


Times have changed.  Young people aren’t aware of the pain the word Nigga stirs, and people of my generation refuse to step to the side after you call us Nigger.


I call that freedom.
Posted by REV-elution at 3:00 PM