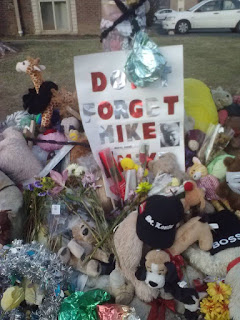 [Picture taken on the site where Michael Brown was killed on August 9, 2019, in Ferguson, MO. Brown, an 18-year-old black man, was shot by Darren Wilson, 28, a white Ferguson police officer.]
Clarence Thomas messed it up for black people. Put another way, I miss the good ole days.


Back in the day, way before today’s “woke” generation, it was assumed that black people had a collective agenda. It felt good standing behind the virtuousness of a black monolithic expectations. For all that plagued black life in America, there was comfort in believing the brother/sisterhood were on the same page.


Clarence Thomas changed all of that by giving new meaning to Frantz Fanon’s book Black Skin, White Mask.  Fanon sought to present a historical critique of the effects of racism and feelings of dehumanization inherent in colonialism. Thomas introduced the reality of Black Skin, White Soul.


When Thomas was confirmed to the United States Supreme Court on October 15, 1991, it uncovered black America’s secret. Not all black people are progressive thinkers. There are black republicans, some of the most conservative ilk, who fight for causes and support people independent of the supposed black agenda.


Nothing has been the same since that day. Black pride and power came with a new verbiage to explain incongruities. He’s not really black. She’s not with us. They’re not our people. They can’t come to the family reunion. You can have her.


She’s not “woke” is another way of distancing the Clarence Thomas type black person from others who identify with the unwritten agenda of black solidarity. Black unanimity was understood and celebrated as part of the black cultural experience. It’s what happens when black people, from coast to coast, gather at family reunions and line dance to the music of Frankie Beverly & Maze. It’s the festivity of getting down with the get down during homecoming at an Historically Black College and University (HBCU). It’s the black homecoming long before Beyoncé’ introduced black culture to white Americans


Being “woke” is another way of saying you’re not down with causes that impact black people. “Woke” is black talk aimed at censuring black people who don’t care about being black. It also applies to the embrace of viewpoints outside the purview of the unwritten, national, black manifesto.


You’re either with us black or seduced into a deep sleep. You’re either down with the televised black revolution or protecting the master’s property like Uncle Tom on the plantation.


Being “woke” is black talk. It is created, adapted, endorsed and inspired by cultural variance, nuances and concerns of black people confronted by the ongoing influence of white supremacy, institutionalized racism and assumptions of white privilege.


White power, white supremacy, and all of its side demons are managed by the influence of cultural appropriation – the inappropriate espousal of customs, practices, ideas and language of black people. White people have taken “woke” and named as their own creation. White people have taken the continuing movement of black people to obtain and maintain progress and named it a progressive movement.


The search to undo the outcomes of slavery, post-reconstruction, Jim Crow legislation, voter repression and the ongoing quest to maintain white domination is the work of black progressive movement. Progress is the goal of the unwritten manifesto of the black collective vision.


Black progress is about sharing the wealth, getting our share and being outspoken about what black people deserve after years of deprived progress. What the black delegation doesn’t need is a gang of white progressives defining what progress means. These are labels created to assert power and privilege defined by white people who have stolen the language of “woke” to separate themselves from other white people.


Step back. Take notes, and please back away from asserting high levels of cultural appropriation in declaring the merit of black people. We got this. We’ll keep our folks in check.


In the meantime, check your white folks.