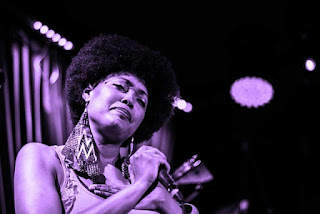 [Mavis Swan Poole performs with the Brian Horton Quartet on September 16th at The Fruit as part of a jazz-infused "support local" campaign highlighting the talents of established and emerging artists with Durham roots.]

DURHAM, NC — On Monday, August 12, 2019, a concert series dedicated to spotlighting locally grown (or based) masters of the jazz idiom kicks off at The Fruit in downtown Durham. The series will celebrate local jazz talent in a setting that mirrors a metropolitan jazz club, on select Monday nights. Titled straightforwardly, Local Jazz reimagines The Fruit to stage concerts that encourage distinguished bandleaders, rising stars, and ambitious students to explore new and original material, record live performances, and/or release albums locally before launching regional or national tours.


Despite Durham’s abundance of talent, many local jazz standouts weather the rite of passage that is low-paying gigs at area bars and eateries — where crowds talk loudly over their masterful playing or peek sparingly at them between bites. Once they’ve outgrown that tedious ceremony there’s little else that pays, save for opportunities at the intimate and beloved Sharp 9 Gallery. As a result, the demand for larger, more attentive audiences has grown and a series that offers opportunities for burgeoning and established local jazz musicians to evolve and expand their reach is much needed.
Given Durham’s long-standing love affair with jazz, it’s unsurprising to note the incomparable talents who have honed their craft here (Stanley Baird, Alvin Atkinson, Chip Crawford, and Eve Cornelious), or the renowned icons that have made the city their home (Branford Marsalis, Nnenna Freelon, Kate McGarry, and Joey Calderazzo). Add the unrivaled Jazz Studies program at North Carolina Central University and the result is a deep — and continually replenishing — pool of local talent deserving of a space to showcase their ability.
The series will be hosted by much-loved singer-songwriter and cellist, Shana Tucker. Upcoming concerts include:


An extemporized reunion of veteran bandleaders and notable NCCU alumni has morphed into an eight-piece outfit of masterful players with a distinctive lilt that calls to mind the Dirty Dozen Brass Band. The spirited good-time is a time-traveling adventure that reinterprets years of New Orleans brass band magic and expands the idiom’s lexicon.


On August 17, 1959, jazz giants turned their back on standard chord progressions and introduced the understated warmth of modality to a world that would be forever changed. The release of Miles Davis’ Kind of Blue — the most important, influential, and best-selling jazz record of all time — represented an instantly successful and universally acknowledged masterpiece, revered as much by rock and classical music fans as by jazz lovers. Kind of Blue is not only regarded as the seminal work in Davis’ remarkable catalog, but the “painterly masterpiece” is regularly included in debates as the greatest album of all time (Rolling Stone).


Annalisa is a lauded saxophonist, composer, arranger, and founder of the euphonious force that is Zen Poets. Her prodigious playing is matched by an uncanny ability to pen imaginative, fiery, and yet, sweet-sounding jazz that has earned her the praise of DownBeat magazine and national notoriety as a forward-looking composer. Together with Zen Poets — drummer Jasmine Best, bassist Aaron Gross, and guitarist Gabriel Dansereau — remarkable originals are buoyed by likeminded and accomplished players with the shared intention of familiarizing ears with the exquisiteness of unanticipated phrases.


A brilliant career spanning twenty years recently surged ever higher with the release of My Americana: a courageous ode to the African-American songbook that imbues Turner’s contemplative flair into Stevie Wonder’s “If it’s Magic” and Thomas A. Dorsey’s “Precious Lord,” and homes them next to inspired originals. The result is an unquestionable masterpiece from a virtuosic pianist who has played alongside or recorded with Raphael Saadiq, Delfeayo Marsalis, John Legend, and the New Orleans Jazz Orchestra.


A rising star whose emotive playing is colored by a velvet tone and ingenious phrasing, Shaquim Muldrow embodies Sonny Rollins’ effortless cool and Don Byas’ buoyant stride. The dazzling tenor saxophonist freewheels through improvised solos with a mesmeric flair, interspersing technical prowess and nonconformist ideas throughout. By all accounts, it won’t be long before the star is aligned with his trajectory.


Shana Tucker & Brian Horton reimagine the quintessential ballad jazz recording John Coltrane and Johnny Hartman with a full-length retelling that embraces definitive standards including “Lush Life,” “They Say it’s Wonderful,” and “My One and Only Love.” With Tucker deftly navigating the iconic balladeer’s romantic baritone, and Horton’s signature warmth striding in step as a modern-day Trane, the idyllic pair add nuance to one of love’s essential soundtracks.


All concerts are general admission. Tickets are ONLY available online & in advance.


Tickets to all shows are on sale now. For program updates please visit Local Jazz and/or The Fruit.
Presenting partners include: WNCU, Ruggero Piano, The Fruit, and Studio Harbor.