Carlos Riley, Jr. says he had to fight for his life after Officer Stewart pulled his gun 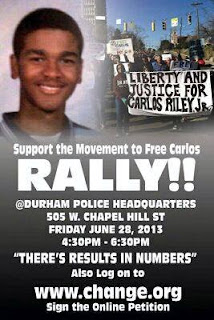 Carlos Riley, Jr. claims his life was at risk.  The evidence supports his assertion.


Why would we? Should we take the word of Kelly Stewart, the police officer shot in the foot after a scuffle with Riley?


The logical response is to side with Stewart.  It’s built within the mentality of most of us to honor and respect law enforcement officers.  We’re taught as children to trust the men and women who carry a badge. That’s what we’re taught, and anyone who questions the authority of a police officer must be telling lies.


It’s not always that cut and dry.  There are too many examples of rogue police officers to validate their report in all cases.  Durham has its share of overzealous men and women in blue who use power like a weapon of mass destruction.


The arrest of Riley came after the horrific case of Stephanie Nickerson.  Nickerson was beaten by Cpl. Brian Schnee when police responded to a noise complaint on Oct. 28, 2012. Pictures of Nickerson’s battered face rapidly spread on the internet. Nickerson was charged with resisting an officer and assaulting a government official.


Charges were dropped on Jan 24 and Schnee resigned from the police department after it was discovered he had used excessive force.


Riley’s arrest raises serious questions regarding the credibility of Durham’s Police Department. Is there a culture of police brutality aimed at black men and women?


Riley was arrested on December 18 at 10:00 am shortly after dropping his girlfriend off at work.  Without reason, he was stopped by Stewart who was driving an unmarked police vehicle and wearing street clothes.


Not knowing Stewart was an officer, Riley drove off.  Stewart chased Riley and turned on his lights.  Riley stops after seeing the lights.


Stewart approaches the car and accused Riley of smoking marijuana.  Riley denies the accusation.  Riley claims Stewart jumps into the car and begins to choke and punch him.  He says he couldn’t breathe.


Riley alleges that Stewart threatened to kill him and began to draw his gun.


Stewart shot himself in the leg.


Riley says he was afraid he would be killed.  He grabbed Stewart’s gun and pulled it away.  He helped Stewart out of the car and fled to protect himself.


He was afraid the next bullet would be for him. I would fear the same.  Wouldn’t you?


Within a few hours, Riley turned himself in.  He’s facing state and federal charges.


Should we assume Riley is telling lies, or is it possible that his life was in danger that day?


Riley is the nephew of Walter P. Riley, a Durham native noted for his work as an attorney in the San Francisco Bay area.  The Riley family will gather today at the Durham Police department to protest the arrest of Carlos Riley, Jr.


Nia Wilson, executive director of SpiritHouse, is helping the family in their quest for justice.  She emailed the following statement:


A 10 year study by UNC political science professor Frank Baumgartner, found that Durham has the highest racial profiling, racial disparity divide among any of North Carolina’s 100 counties.  Black motorists, in Durham, are unjustly stopped, searched, and are 900% more likely to be incarcerated for criminal conduct than whites suspects. Yet, when we hear of cases like Stephanie Nickerson and Carlos Riley Jr., the assumption and general opinion, is that they must have done something wrong. It makes it easy for people to walk away, rather than to do the hard work of confronting a systemic problem that heavily impacts the African American community. Carlos, like Stephanie, did nothing wrong on December 18. On the contrary exercised his constitutional right to stand up for himself and protect his life.


Last night I attended a film viewing, at the Hayti Heritage center, of a new documentary about Mumia Abul Jamal. Mumia has served over 30 years in a Philadelphia prison for a crime that he did not commit. Mumia, who continues to declares his innocence, has said countless times, “My only crime is that I survived.”  Carlos Riley Jr. could say the same.


The rally takes place today in front of the police department at 505 W. Chapel Hill Street.  It begins at 4:30 pm.


It could be assumed that Carlos Riley, Jr. is just telling lies.  What are the consequences if he is telling the truth?


Are we willing to uphold the integrity of a badge when there are too many examples of tainted police? And, what happens when the word of the police outweighs the evidence?