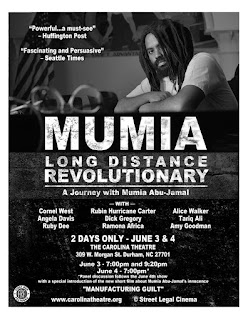 Many consider Mumia Abu-Jamal a political prisoner.  They contend it isn’t the death of a police officer that keeps him in prison.  His voice hasn’t been silenced since the night he was arrested while moonlighting as a taxi driver to make money to add to what he made as a journalist.


He didn’t stop writing.  He continues to lead and inspire others to liberate the masses.  Abu-Jamal says he has been “punished for communicating.”


Mumia- Long Distance Revolutionary documents Abu-Jamal’s childhood, his work as a journalist with the Black Panther Party Newspaper, the FBI’s COINTELPRO program, and the reason behind him being forced to moonlight as a taxi cab driver the night he was arrested for killing Daniel Faulkner, an officer with the Philadelphia police department.


The film will be shown at the Carolina Theatre in Durham on June 3 & 4. There will be two showings on Monday (7:00 pm & 9:20pm), and one showing on Tuesday (7:00 pm). A panel discussion follows the June 4 show with a special introduction of the new short film Manufacturing Guilt, about Abu-Jamal’s innocence.


Jamal Hart, Abu-Jamal’s son, will participate on the panel.


“I became a priority adverse target to further punish my father,” Hart says. Mumia – Long Distance Revolutionary has helped Hart deal with some of that hurt.


“It’s like being brought back in time – a glimpse of the past,” Hart says. “Seeing an active journalist doing what he loves. My beloved father being the voice of the voiceless.”


Keith Cook, Abu-Jamal’s brother, will also be on the panel.  Cook, who lives in Hillsborough, NC, says the film has made him much more knowledgeable of the details of his brother’s case.


“If you grew up in Philadelphia, very rarely did the press say anything positive about Mumia. They portrayed him and convinced a large portion of the city that he was guilty of a crime that he did not do,” Cooks says. “This film has been good for me and Mumia and all the people around the world who have been struggling hard to get positive pictures and words out about Mumia and his case.”


Rachel Wolkenstein will also be on the panel. She is an attorney, political activist and spokesperson in the fight to free Mumia Abu-Jamal since 1987.


“Long Distance Revolutionary, is a powerful explication of and testament to the character of this man--innocent of everything except being an uncompromising voice for justice against the forces of race and class oppression,” Wolkenstein says.


Noelle Hanrahan will also serve on the panel.  Hanrahan began recording Abu-Jamal’s voice in prison when she recorded him on death row at Huntingdon State Prison in July of 1992. These recording sessions lead to her recording the controversial censored series on National Public Radio as well as Abu-Jamal’s first bestseller “Live From Death Row.”


Stephen Vittoria directed and produced Mumia – Long Distance Revolutionary.  Vittoria says his first goal was to tell a good and strong story that is well-researched.


“Mumia Abu-Jamal's life is a remarkable story, one of courage, compassion, and love, oftentimes under harsh an inhuman conditions,” Vittoria says. “In fact, the so-called public narrative of Mumia's life told by the lap dogs in the mainstream media and their corrupt masters, the power-brokers pulling the strings, has been a combination of myths, innuendo, and outright lies.”


Vittoria says he has been surprised that Abu-Jamal’s lifelong struggle against racism and class oppression has not been fueled by the politics of rage but rather by love.


“I've told many people that this film, for me, is the film of a lifetime,” Vittoria says. “If I never make another film after this one, that's okay. This film captures the essence of its subject, Mumia, as well as my essence as a filmmaker - both creatively and politically.”


Vittoria says the response to the film has been one of the best parts.


“The audiences are passionate, inspired, and very vocal with their embrace of the film - and that's because Mumia's spirit is one that inspires people everywhere: his struggle, his steadfastness, and his uncompromising approach to telling the truth,” Vittoria says


Cook says he’s optimistic that his brother will be released.


“I go bed sometimes thinking about what I can do next or what are the next steps,” Cook says. “And I am concentrating on having him free in my lifetime.”


It’s a long run to freedom.  It’s even longer when you’re a revolutionary.