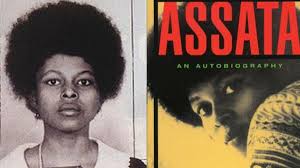 
The FBI has added Assata Shakur to its Most Wanted Terrorist List one day after May Day. With the announcement the state of New Jersey added $1 million to the FBI’s $1 million reward for her capture.


Who is the black woman who appears on those wanted posters?  She’s the woman known for getting shot with her hands in the air.


It happened on May 2, 1973 at 12:45 a.m. Shakur, Zayd Malik Shakur and Sundiata Acoli were stopped on the New Jersey Turnpike in East Brunswick, NJ by State Trooper James Harper for driving with a broken tail light.


“Hold on – two black males, one female,” The recording of Trooper Harper played at the trials of both Acoli and Assata Shakur.


Zayd Shakur was driving the car.  Trooper Harper asked him for identification. After noticing a discrepancy he asked him to get out of the car. He began questioning him at the rear of the vehicle.


It was at this point in the trial that accounts of the confrontation differ. During the ensuing shootout, Trooper Foerster, who was present for backup, was shot twice in the head with his own gun and killed.  Zayd Shakur was killed, and Assata Shakur and Trooper Harper were wounded.

With gunshots wounds in both arms and a shoulder, she surrendered after a shootout and being chased in the Pontiac LeMans they were driving. Police moved her to a hospital under heavy guard and was interrogated and arraigned from her hospital bed.


Assata Shakur was a member of the Black Liberation Army, and had a number of previous run ins with the law. .

Shakur was convicted as an accomplice in the murders of Trooper Foerster and Zayd Shakur, possession of weapons, and attempted murder of Trooper Harper.


During her testimony, Shakur denied shooting either Harper or Foerster.  She also denied handling a weapon during the incident. She was cross-examined for close to two hours.


A key point of Shakur’s defense was medical testimony that demonstrated that she was shot with her hands up and that she would have been unable to fire a weapon.  The median nerve in her right arm was severed by the second bullet, making it impossible for her to pull a trigger.


Shakur was imprisoned in Yardville, NJ before being moved to Rikers Island.  Her daughter was conceived during her trial, and born on September 11, 1974 in the psychiatric ward at Elmhurts General Hospital in Queens.  In her autobiography, written from Cuba, Shakur claims she was beaten and restrained by female officers for refusing a medical exam from a prison doctor.
On March 31, 1978, Shakur was transferred to the Clinton Correctional Facility for Women in New Jersey.


Angela Davis called her a political prisoner.  An international panel of seven jurists representing the United Nations Commission on Human Rights concluded in 1979 that her treatment was “totally unbefitting of a prisoner”. Their investigation that considered human rights abuses of political prisoners cited Shakur’s imprisonment as "one of the worst cases" of such abuses.


So she ran.  On November 2, 1979, she escaped the Clinton Correctional Facility for Women when three members of the Black Liberation Army visiting her drew concealed weapons, seized two guards as hostages and stole a prison van.


She kept running.  Shakur fled to Cuba by 1984 and was granted political asylum. In 1985, she was reunited with her daughter.  In 1987, she published Assata: An Autobiography.


A documentary film about Shakur, Eyes of the Rainbow, written and directed by Cuban filmmaker Gloria Rolando, was released in 1997.  Hip-hop artist Common recorded a tribute to Shakur, “A Song for Assata,"on his album Like Water for Chocolate. Digable Planets, Public Enemy, and X-Clan have also recorded songs about Shakur.

So, what is implied in placing Shakur on the FBI’s Most Wanted List of Terrorist?  It takes a sad era in American history and white washes the rest of the story.  It hides a sad truth.  Yes, people like Shakur and Mumia Abu-Jamal represent an age of black radicalism.  All of that is true, but let’s not forget the reason for all that rage.


The police had guns and were quick to kill black folks for crossing the street.


Yes, she ran from all of that.  She ran because she was tired of the mistreatment.


Placing her on the Most Wanted Terrorist List is another example of how so many refuse to understand the deep burden that comes with the sad truth.


A blog for Assata
Posted by REV-elution at 1:16 PM