Voyager Academy baseball team does't have to pay to play 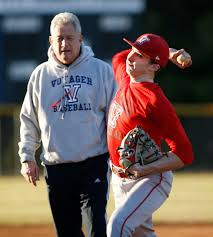 
Bumgardner, who is white, is still fighting for black youth.
Bumgardner is on a new mission. “It’s further evidence that the Durham Public School System doesn’t care about black and brown students,” he pitched his point.  “Administrators are only concerned with placating white parents.”


Bumgardner wants to know why the baseball team at Voyager Academy is allowed to practice and play games at Southern High School free of charge.  The facility rental contract with the Durham Public School system grants Voyager usage of the Southern High School baseball field from September 7 – June 1, Monday – Saturday at no charge.
Bumgardner claims the agreement is a clear case of favoritism to a charter school with a high percentage of white students.


“It’s the school systems way to stop the bleeding created after Chewning was made into a year-round school,” Bumgardner says. “White parents were upset when inner city students enrolled.  That’s when Voyager came along.”
Bumgardner sees the decision to grant Voyager Academy free use of  the Southern High School field as a precedent that could come back to haunt the system.  Currently, there is no policy involving renting facilities to charter schools.  Space is rented to churches and other nonprofit organizations, but rarely is the fee for usage waived.


“What would prevent others to come back and ask for their money back because Voyager gets to use the field free of charge?”
It is not uncommon for schools to rent facilities.  Northern High School rents the Durham County Stadium to play football games.  The Durham School of the Arts rents the Durham Athletic Park to play their baseball games.  Both fields are owned by the county.   Bumgardner wants to know why certain schools are forced to spend money from their budget to rent county owned facilities, while Voyager Academy, which draws money from the school budget, gets a free ride.


Each traditional public school is budgeted $12,500 annually to run their athletic programs.  The rest is made up through ticket sales and fund raising.
“They [Voyager Academy] are presently using Southern to hold their home baseball games and charging admission and selling concessions,” Bumgardner wrote in a letter to the athletic directors at all DPS high schools. “They were given the use of DPS facilities for free for practice, and they are using it for games and charging admission (making money/stealing from our kids). All during the same time that DSA baseball team has no place to practice and has to rent the DAP for games at a great expense to them. “
“If those charter schools want to operate athletic programs they need to use the money given to them by the state and county to do so,” Bumgardner says. “They can rent facilities from Parks and Rec. Rent auditoriums from the convention center. But for them to come back to DPS facilities and use them after they have taken money directly from DPS is not a good value for a taxpayer.”


Bumgardner says Superintendent Eric Becoats told member of the Board of Education the policy is ambiguous and he plans to do nothing until the policy is changed.  The current policy grants principals the authority to recommend facility usage to the central office for approval.  The principal can propose a waiver of any fees.  The decision to rent the field to Voyage Academy and to waive rental fees appears to have come from the school principal.
“Voyager looks like the first step of the white flight I witnessed as a young boy in Durham growing up on Gregson Street,” Bumgardner says. “We have to find a way to stop giving white people permission to flee.”


Some may call Bumgardners thoughts over the top.  All that talk about race is just begging to open wounds that aren’t there.  Many people wish he would go to the nearest corner and remain silent.
“I have bi-racial children,” Bumgardner says.  “I have a wife who teaches in the Durham Public School System.  I know and see things because of what she brings home.”


For Bumgardner there is more to the story than most can see.
Maybe others should take a look.
Posted by REV-elution at 12:29 PM