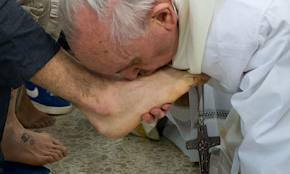 
What difference does it make, is the question that must be asked as the world witnesses the beginning of a new papacy. Should people outside the Catholic tradition get caught up in the frenzy of excitement surrounding Pope Francis?


The tradition has been to limit the pope’s foot washings to men.


Speaking to about 1,600 priests who packed St. Peter’s Basilica for Mass on Thursday morning, Francis talked about the need to concentrate on the people they are ministering to.


“We need to go out, then, in order to experience our own anointing ,” he said. “to the outskirts where there is suffering, bloodshed, blindness that longs for sight, and prisoners in thrall to many evil masters,"


Forget all that clerical privilege that comes with being the Holy Father. Francis took the Thursday story of Jesus washing feet and offered it to the least of these.


Holy Thursday is the day Christians around the world celebrate Jesus’ last supper with his disciples before his crucifixion.  Washing feet re-enacts the humble gesture with the disciples.  It’s one of the most important rituals within the Christian faith tradition, and Pope Francis chose to re-act his first foot washing as pope with a group of youth in a detention center.  Among them, a few women.


Rather than washing feet at the Basillica of St. John in Lateran, the most important of the four major basilicas in Rome, Francis chose to kneel before young offenders at the Casal del Marmo Penitentary Institute for Minors.


He washed the feet of 12 young offenders.  He kissed their feet after washing them.  Two young women were in the group.  He washed and kissed their feet.  It’s the first time a pope included females in the rite. The ceremony has been limited to men, due to the assumption that all of Jesus’ apostles were men.


The young people were aged between 16 and 21 and were chosen from different nationalities and religious backgrounds.


Once again, that’s a big deal.  Two Muslims were chosen.


Imagine how the moment will change the lives of the young people chosen to have their feet washed by the pope.  Isn’t that the promise of new life that comes with the celebration of Easter?


Because it teaches a lesson about liberation and new life.  Because it’s a lesson for those chosen to serve in leadership roles in the Church. Power is not given to gain power.  The life of service is given to those willing to walk with the lowly and poor.  Along the way of service, we stop to wash their feet.


It’s a big deal because it shows a willingness to move beyond the restrictions of tradition.  In washing the feet of women, Pope Francis paved the way for a deeper conversation related to other traditions that need to be overlooked due to more pressing needs.


I hope those outside the Catholic tradition are wataching.


They could use taking a lesson from a pope willing to wash the feet of young people in a detention center.
Oh, don't forget the women.