And the boos keep coming 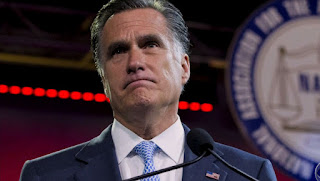 Mitt Romney used black folks to make a political point.  It cut like a knife.  It hurts deep.  He deserved those boos.
When the Republican nominee told the NAACP that he was committed to eliminating Obamacare, those in the crowd went Apollo on him.  They shouted and booed in wait of the sandman to come on stage to drag Romney with one of those rods used to guide sheep.
Who can blame them?
At the root those boos are in response to the unspoken message Romney was making to black voters.  He doesn’t care about the black vote.  He showed up not to convince the people at the annual convention to give him a try.  He came to show the world he’s willing to go into the lion’s den and take stabs at the people in the pit.
It smells like one of those political maneuvers aimed at rallying those who view Obama and his agenda as the antichrist covered in darkness.  Romney told the crowd to kiss his white behind and face the music.  I’m not here to get your votes.  I don’t need you.  I don’t respect what you think.  I’m not concerned about the process that went into passing the legislation that will offer affordable care to the people in your families.
It doesn’t matter that the plan was modeled after the one Romney created while serving as Governor of Massachusetts. His speech was an attack of all things Obama, even if his plan looks the same.  This was not a tea bag meeting.  Those listening have enough intelligence to smell bull dung when it’s slung in their faces.
Why did he show up?  Was it to convince other voters that he’s not the mean dude represented in those ads that claim he sent jobs overseas? Should we connect the dots between Romney’s NAACP speech and his new campaign ads that argue Obama’s commercials about Romney shipping jobs overseas are a lie?  Is the timing an indication that Romney is attempting to transform his image by showing up at the party held on the black side of the tracks?
Romney wanted to get booed off the stage. He wasn’t there for votes.  He knows he won’t get them.  His desire is to garner enough reports that portray black people as narrow minded enemies of his agenda due to his white skin.  He showed up to prove that point.
Can you hear the echo in the room?  Hey you.  Yeah you, the conservative white dude over there.  Did you see my guts when I walked in a room filled with black people and told them I don’t care about what they think?  Come and tap me on my back.
It’s the type of message that galvanizes conservative voters.  They’re looking for a political messiah willing to put black people back in those fields with tobacco waiting to be picked.  Obama represents the fulfillment of black folk’s dreams.  Imagine all the clapping hands on the white side of the tracks when Romney stood up to those supporting Obama.
The bravery of Romney places a spotlight on white fear.  As much as many hate policies that elevate black and brown people, most are afraid to stand in a crowd and face the potential beat down.  They fear that black power.  That’s why they cross the street when they see us coming.  They’re comfortable in using all that covert racist power to keep people subjugated.  Obama took all that power and control away by becoming President of the United States.
I can hear the roar in hillbilly land. “You tell em Mitt,” followed by a quick slurp of Budweiser.  “Put em back in their place Mitt.”
Of course this is all speculation.  It could be that Mitt simply wanted to convey his heart.  It’s possible that he does care about black people.  Certainly he hasn’t been nurtured by the thoughts of a religious organization that excluded people of black African descent from Priesthood and from participation in temple ceremonies until 1978. Or maybe he has.  Should it matter?
There are multiple reasons to boo Romney.  It’s one of those things that happen when you’ve been disrespected.
And the boos keep coming.
Posted by REV-elution at 11:25 AM