Same-Sex Union Ban: Not in Durham 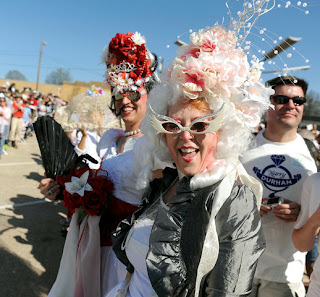 I love the guts of Durham’s city council. As a collective voice they have proven an ability to do the right thing when doing so may create a backlash among voters.


On last week, they unanimously passed a resolution opposing a statewide referendum on a constitutional ban on same-sex marriage. Our gutsy council sent a message to the Republican-controlled legislature to stick a sock in it. The good folks in Durham, NC aren’t down with hating people and denying each citizen their constitutional rights of life, liberty and the pursuit of happiness.


Durham is not alone among municipalities in the Triangle opposing a constitutional amendment. Carrboro and Chapel Hill both offer domestic partner benefits and consent to couples registering as domestic partners. Mark Kleinschmidt, Mayor of Chapel Hill, is openly gay. Carrboro Alderwoman Lydia Lavelle and her partner Alicia Stemper, held a commitment ceremony and registered their union with the town.

An amendment to the state constitution could annul Durham’s domestic partners benefits. The resolution reaffirms the council’s dedication to the rights of those in same-sex partnerships. It states the city has shown "its commitment to making Durham a welcoming community for gay and lesbian residents by formally extending health care benefits to same sex domestic partners of city employees and with their legal dependents in 2002.”


While preparing for the Marry Durham ceremony in March, I heard the frustration of numerous same-sex couples who found it difficult to embrace the symbolic marriage to a city when they could not marry the person they love. I took great care to celebrate the love we have for the city while acknowledging the irritation among those who wanted the same rights as those in love with a person of the opposite sex.


That day was a celebration of the rich diversity and openness in Durham. Our local politicians showed up to makes vows to the city we love so much. “Today, we marry our city. In doing so we affirm our love for each other,” I said as the officiant of the ceremony. “Today, we marry each other. Beyond race. Beyond gender. Beyond class. Beyond sexual orientation. Beyond religion and all other declarations. For better and for worse. In times of economic strength and recession. We love you Durham and we love each person gathered to bear witness to our absolute love for all that makes our happy home.”

Close to 2,000 people took vows that day. They represented all segments of the city’s diverse population. Many serving on the city council honored those vows when they stood before me, Frank Stasio and Willie Bull. As corny as the event may have seemed to those who read about it the next day in the newspaper or saw the footage on the local news, we took those vows seriously. We embraced the men dressed in wedding dresses. Yes, the event was part gay pride, part Mardi Gras and part something no one has ever seen. It was a transformational moment in which those who made those vows committed to move past all language and politics of division.

The council’s vote affirms how seriously they stand behind those vows. It’s why so many, like me, love Durham so much. It’s why we wanted to marry the city. Sadly, not everyone feels the same. There are those who don’t fit in.

“You and the City Council have done it again with your opposition to a ban on gay marriage. This is the kind of thing that makes Durham the laughing stock of the area. You can't even run the city efficiently must less the state or the nation. You need to stick to concerns that are the business of the city. Do you really think that the state cares what the Durham City Council thinks,” Kenneth L. Hunt emailed Council Michael Woodard after the passage of the resolution.

“As one state congressman said with your opposition to Mexican matricula use for drivers licenses, ‘Those folks walk to the beat of a different drummer!" Do you really think that Arizona cares what the Durham City Council thinks of their laws on immigration? Most of Durham, including me, doesn't care what the council thinks. It just irks me that you think that you represent the opinions of the city and you certainly do not. You Mr. Woodard are a poor excuse for a representative of Durham. You represent the things that give this city a bad name all around the area. If God was going to give Durham an enema, he would stick it in Mike Woodard and the city council. You are a disgrace.”

Given Hunts usage of the enema imagery, its people like him, not Woodard and other members of the city council, who need to be flushed down the toilet. His rant is nothing but a load of crap, and in need of being extracted from public discourse. That’s why I waited to the end to even mention his dung. Flush it please before its stench invades the space we all enjoy.

Yes, I love the members of the city council. Today people can file to run for Mayor and city council this fall. I have one word for those who want to run. If you can’t take the vow we all took on March 19th, don’t waste your time. This is a loving community.

Find another city to spit your hatred.
Posted by REV-elution at 12:40 PM