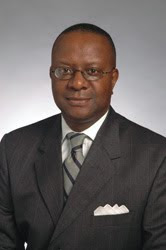 You can’t keep a big fish in a small bowl. You have to let that sucker out to swim in a large body of water. He needs room to grow and show off those swimming skills.

That’s the way I view Carl Webb’s decision to start a new work. Webb has left his role as the primary spokesperson for Greenfire Development to embark on a new venture- Forty/AM. He maintains his role as partner with Greenfire Development and will serve as a board member. He will no longer be involved in the daily operations of the company instrumental in the renaissance of the downtown district and leading the deal to sell the North Carolina Mutual Life Insurance building.

Webb left Webb/Patterson Communications to team up with Michael Lemanski to realize his dream of resurrecting the Black Wall Street. That’s the name given the former hotbed of black business on Parrish St. It was the sociologist E. Franklin Frazier who called Durham “the capital of black bourgeoisie.” Frazier, in “Black Bourgeoisie, noted the massive achievements of the descendents of slaves in Durham.

Webb envisioned a multi-level building on Parrish Street across from the former CCB building. It was to be Durham’s memorial to the glory days of the Black Wall Street. Greenfire Development purchased the CCB building. The sign that adorned the top of downtowns tallest building was replaced with the name of the bank that took ownership of CCB –Sun Trust. Construction begins soon to convert that building into a boutique hotel.

The vision of the Black Wall Street continues to capture the imagination of Webb. One only needs to consider the name of his new company.

Forty/Am may confuse those not familiar with the struggles of black folk. It evokes recollections of a promise never fulfilled. During the last stages of the Civil War, General William Tecumseh Sherman issued an order on January 16, 1865 providing 40 acres of land and a mule to the former slaves. By June 1865, around 10,000 freed slaves were settled on 400,000 acres in Georgia and South Carolina. After the assassination of President Abraham Lincoln, his successor, Andrew Johnson, revoked Sherman's orders and returned the land to its previous white owners

Could it be that Webb named his new business to divulge his irritation with attempting, the best he can, to build a work while contending within an environment that pits him against people with more than enough? Could it be that Webb is sending a message? That he lacks what others take for granted and has to survive within a business culture that has him pressing, on a daily basis, just to keep pace with those who have more than enough to take risk that he can’t afford to take?

Watching Webb’s rise as a major player in downtown economic development has been a text book lesson on the way money and power works in Durham. Those who have get more. Those who have insight, vision and talent, void of resources, are left waiting for those at table to drop a few crumbs from their over stacked plate. There is a disparity between the way Webb has been treated by the white and black elite of the city. Those with deep pockets and reputations are treated like royalty when seeking the support of local government in the form of an incentive package.

I’m angry about the way Webb has been treated. I feel the agony that comes with watching people escorted to the execution of their dreams. They don’t have to bang on doors; there are people waiting to open the door with a plate of cheese and a bottle of wine while standing with them every step of the way. Others, like Webb, have to answer to the gatekeepers- the white and black men and women who conserve their right to determine who is allowed access to the easy road leading to success.

I’m not sure what Forty/AM means to Webb, but I know what it means to me. Those with the resources refuse us access to what rightfully belongs to us. They stand and watch as we struggle to survive in that small bowl they’ve given us to swim. They have the ability to pull us from that place that strangles our life and creativity, but they would rather watch us die.

It’s difficult being a big fish in a small bowl. All you need is a way out. All you desire is a place to show off those swimming skills. The bowl is too small, but those watching are amused by our grapple to maneuver our intellect and vision in a space too small to sustain all of that potential.

The good news is fish like Webb have strength enough to jump out of the small bowl. He may not have been given his Forty/AM, but something tells me he will find a way to offer others what no one was willing to grant him. A chance to swim.

I think I might swim in the lake with Webb. It’s time to break free from this fish bowl
Posted by REV-elution at 10:29 AM