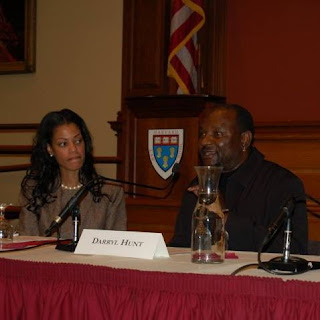 (Photo: Darryl Hunt with April Garrett during panel discussion on the movie The Trials of Darryl Hunt at Harvard University)
The text message I received from April Garret forced the type of reflection that made me mad and sad within the same breath.


“Darryl Hunt died today at 51,” I paused before reading more. “He was in a truck with a suicide note and a gun.”


April and I were introduced to the life of Hunt at the Full Frame Documentary Film Festival in Durham, North Carolina. It was during the showing of The Trials of Darryl Hunt, the documentary that exposed the world to the malfeasance that led to Hunt’s wrongful conviction of the rape and murder of a Deborah Sykes, a white newspaper copy editor in Winston-Salem, North Carolina.


Hunt was imprisoned in 1984 and spent 20 years incarcerated. In 2005, he was exonerated by DNA and other evidence that proved the district attorney was complicit in the handling of the case. In December 2003, Hunt’s DNA was run against those in a database which determined the DNA in his case belonged to Willard E. Brown. Brown, who was a primary suspect prior to Hunt’s arrest, confessed to Sykes rape and murder long before Hunt’s release from prison.


On February 6, 2004, Superior Court Judge Anderson Cromer vacated Hunt’s conviction. Getting there wasn’t an easy task. Hunt, and his legal team, were forced to maneuver through dynamics that continues to impact black men and women caught in the criminal justice system. Concerns like cross-racial eyewitness identification, prosecutorial misconduct, implicit bias in death penalty cases, inexperienced defense attorneys assigned to capital cases and errors in police procedure are documented in The Trials of Darryl Hunt.


Barry Scheck, of The Innocence Project, worked on Hunt's case for ten years. After his release, Hunt worked with the Innocence Project and The Darryl Hunt Project for Freedom and Justice, the group he founded to educate the public regarding the flaws within the criminal justice system while advocating for the rights of the wrongfully incarcerated and providing resources and support for people after serving time in prison.


The news of Hunts suicide is difficult to take.


I met Hunt after writing a column that profiled Hunt published in the Durham News. The column spoke of Hunt’s humility and faith during his journey for freedom. Hunt was in Durham to speak during the annual meeting of Durham Congregations in Action (DCIA). He approached me after someone informed him I wrote the column he read earlier that day.


His response reflected a level of appreciation I have never experienced as a columnist.  His voice was broken and his eyes exposed a few tears.


“Thank you for what you wrote,” he said. “It means more than you will ever know.”


It’s a point that Garrett and I shared prior to Hunt’s death. Garrett conducted a screening of The Trials of Darryl Hunt at Harvard Divinity School in collaboration with Harvard Law School. Garrett, a Harvard Divinity School graduate, held the event as the founder and president of Civic Frame, Inc. In addition to Hunt, the panel included my friend John Mendez, pastor of the Emmanuel Baptist Church in Winston-Salem, NC, members of Hunt’s legal team, public defense advocates and Katie Brown who produced the documentary.


Both of us have been changed after meeting Hunt.


"From day one, I told them I was innocent,” Hunt said.  “And the question has always been, was anybody listening?”


There was so much that deserved our attention. I’m sure his closest friends noticed the depression that came after Hunt was diagnosed with stage IV prostate cancer. It had to be hard not to notice the pain after the separation from his wife.  She was the rock that anchored him after they were married during his incarceration. It had to hurt when their love wasn’t enough to endure the challenges that come with making a marriage work beyond the limits of prison bars.


Few of us fully understand the torment of serving 20 years in prison. It has to be worse when you’re innocent and youth is swallowed up with the passage of the days.  I don’t understand the burden of incarceration. Few of us do. Prayerfully, we never will.


I’m in no position to judge why he gave up on life after clinging to the dream of freedom.  Hunt asked if anyone is listening. Maybe he is challenging us to continue to listen.


Hunt leaves behind the witness of his struggle for justice.  Maybe his release from prison wasn’t enough to set him free. If so, this is the strain among those who endure this form of mistreatment.


This is the weight carried when people fail to listen to the cries of the innocent.


Live well in paradise my friend.


I hope we are listening.
Posted by REV-elution at 6:53 PM