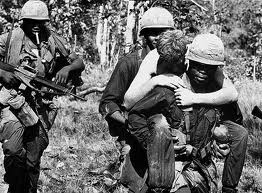 They bring black men home in body bags.  That’s what I thought back in high school just before the Vietnam War came to an end.  I remember that day, April 30, 1975, when it was announced the war was over.
My fear ended.
I’d seen too many who came back home in one of those bags.  For those who made it back walking and talking, it felt like something died between leaving and coming back home.  The look on their faces mimicked the panic of something lost.  They walked like ghost seeking a house to haunt.
I watched as older cousins came back hooked on heron.  They poured the poison in their veins to avoid the memories of things too deep for me to understand.  I watched them die slow physical deaths as drugs killed the last part left after the war took the rest away.
The clock was ticking.
My time would come soon.  I considered my dreams for a better life, yet knew Uncle Sam would come knocking on my door.  The draft was the Grand Reaper.  The books I read seemed a waste of time given the pain waiting on the other side of graduation.
The gloom intensified with each report of lost lives.  I watched and listened as young people protested.  I listened to the songs of my generation, and fell in line with those who fought against war.  It seemed a waste of human life.
More than anything, I was scared to die.  I didn’t want to fight when there were too many battles in America.  There were the constant fights with white boys after racial slurs forced a response.  There were the fights for respect after being judged for reasons beyond merit.  It was an age of deep rage. Talk of revolution was countered with a promise for integration.
I didn’t want to fight for a country that didn’t want me.
It was hard to understand war.  The years following my high school days have helped me view war from the lens of maturity.  I’ve listened to the stories of men who fought to maintain our freedoms.  I honor the sacrifices of those who came back home in body bags.  Many didn’t want to fight, but their service to our country is no less because they were forced to go.
Isn’t that the tragedy that comes with maintaining our national security?  Lives are lost.  Others return mangled – some physically, others mentally.  It’s the sacrifice they give to secure our freedom.
I watched as my cousins came home.  Broken by the war, they were left abandoned by a nation at war with the war.  The national debate over the legitimacy of the war left them devoid of resources to transition back into life back home.  Many had no formal training.  They knew guns.  They knew death.  They needed work.
They needed our respect.
Many conflicts have followed Vietnam.  Countless have come back home in body bags.  Today we honor their service to our nation.  Some died willingly.  They signed up to fight for the red, white and blue.  Others were forced to go.  Their sacrifice is no less due to the nature of their enrollment.
They were sons, daughters, fathers, mothers, cousins, aunts, uncles and close friends. They attended church on Sunday and Saturday.  Some went to the synagogue on Friday.  They came from every state in the union and every community from coast to coast.  They were Republicans and Democrats.  Some were Libertarians.  Some didn’t care about politics.  They were a blend of national unity – all races, creeds and other forms of identity.
They died for our freedom. So, to those who died because they were forced to go – thank you for your sacrifice.  For those who stood in pride and died for the flag they loved so much – thank you for your sacrifice.
And, for the veterans in our midst, we give our flowers today.
We don’t understand some of the wars we have fought.  Veterans Day is not about the politics surrounding war.  It’s about the life and sacrifices of those who have served.
So, thanks to all our Veterans.  You have served us faithfully.  We honor you.  For those not with us, there’s so much I wish to say.
Not enough words.  There will never be.
Posted by REV-elution at 9:18 AM