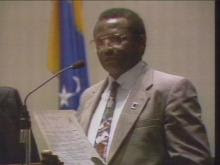 Yesterday was my birthday, so I didn’t make Chester Jenkins’ funeral. I picked up today’s Herald-Sun to read about the service. I assumed it would be on page one, section A. It wasn’t there. I moved on to page 2, 3, 4-all the way to the end of section A. Must be on the front page of the metro section. Not there. Not on page 2, 3, 4-not anywhere in section B. I even checked the sports section. Of course it wasn’t there. Must have missed it, I thought, so I went through the paper a second and third time hoping to find something.

I didn’t know how to feel after taking a few sips of coffee to ease the sting of this major gaffe. How could the paper that claims to be the place to get local news miss one of the biggest local stories of the summer-the death of Durham’s first black mayor? As I journalist, I wanted to find a reason to explain the oversight. Maybe, just maybe, it was one of those rare days when there was too much news and not enough space.

I read the headlines above the fold (the most important news stories of the day). Afghanistan’s deadliest month claims 4 U.S. Troops. I threw the paper on the table in front of me at Parker & Otis. That story was pulled from the AP wire and fit best in the section with national and world news. County hires new director of DSS. That’s an important story, but it belonged on the cover of the metro section. There was another story about school construction and folks taking advantage of the early retirement package offered at Duke.

The cover of the metro section was worse. I was left speechless regarding the mindset that led the paper to fail to report on the Jenkins funeral. Maybe, just maybe, the failures of the editorial staff over there had something to do with a lack of understanding related to the historical significance of Jenkins becoming the first black mayor of Durham in 1989. I had just moved to Durham when it all happened. It came during a time when racial tension was frenzied and some feared the city would explode in ways common to the Watts riots of 1965.

Durham was more discordant then. Race mattered in a way different than today. Things changed due, in large part, to the leadership of men and women like Chester Jenkins. He came on board as mayor before Ken Spaulding called for a memorandum of understanding between members of the Friends of Durham and the Durham Committee on the Affairs of Black People. He took office before the heated battles over school merger and the highly charged debates that came after the board of education hired Ann Denlinger over a black man who was chosen as the National Superintendent of the year. It happened before loangate, troubles within the police department, controversial black city managers and a myriad of issues that had citizens venting on the editorial page of the Herald-Sun.

I wrote columns during those years. William Hawkins and Bob Wilson were dedicated to creating a space for the citizens of Durham to reflect on matters important to them. They were committed to quality journalism. They weren’t afraid to follow the money to investigate corruption in local government. It is true that the paper was criticized for being overly aggressive. Some contended the paper was run by a gang of closet racist who used the pen to destroy blacks in leadership. The truth is Hawkins and Wilson were visionaries who managed a paper that became as central to the political process as the offices of local government. They created a place where the news became a part of community discussions.

The paper was a vital part of the community. You could depend of the paper to be present, for better or for worse, to delve into the affairs impacting our community. It was a true community paper that understood the validity of consistent local voices writing commentary, and how those writers would inspire others to write in response. They did more than look at the bottom line, they competed with the other local paper because they offered a brand that no one else could match-they knew Durham, and they knew what the citizens wanted to read.

I was proud to write columns for the Herald-Sun. They allowed me the freedom to share a vantage point committed to making Durham a better place for all its citizens. All of that has changed. The paper has come to this-a rag too foolish to understand the significance Chester Jenkins made as the first black mayor of Durham. I’m sure the paper will rebuttal with a reminder of what was written before the funeral. Thanks for sharing, but the reader deserves for the story to be followed to the end.

We want to know what was said at the funeral. We want to know who was there and how people felt when they walked away. We want to know because history was made when Jenkins became mayor. It’s a sad day when history doesn’t get a line on the first page. It’s even worse when it’s not mentioned at all.
Posted by REV-elution at 1:31 PM